Helping cutting-edge industries advance is just another way chemistry works behind the scenes to fuel innovation.

Industrial Lubricants for the Automotives Industry

Whether on the road or in outer space, new frontiers often come with harsh conditions. To help brave those conditions, industry turns to chemistry.

Whether on the road or in outer space, new frontiers often come with harsh conditions. To help brave those conditions, industry turns to chemistry.

Take the auto industry. Engine sizes are shrinking to meet rising fuel-economy standards, as the EPA has set a 2025 target of 54.5 mpg for corporate average fuel standards—a 49% increase over the 2017 standard. EU regulations are even more demanding, with a 2021 target of 5.6 liters per 100 km, or 57 mpg. This decrease in engine size correlates to a significant increase in under hood temperatures, which have climbed from 120°C (248 °F) in the early 2000s, to near 200°C (392 °F) today¹ . How are auto manufacturers dealing with this shift in temperature without sacrificing performance? They’ve turned to the chemical industry to find high-performance materials and components, such as Krytox™ high-performance lubricants.

The standards described above are huge leaps to make in just a few years, especially for an industry that relies almost entirely on internal combustion, a technology that dates back about 150 years. While electric and hybrid cars can help the industry meet this standard, only 25% of cars will have electric motors by 2025², predicts one report.

Thanks in part, though, to contributions from the chemical industry, automakers are finding new ways to hit these ambitious efficiency goals using traditional internal combustion technology. Chemours, for instance, offers Krytox™ , synthetic lubricants that can last years—even decades—in many applications. And because they're completely inert except in very limited situations, they have become critical components for many industries, including aerospace, automotive, food processing, fuel, power generation, and more. 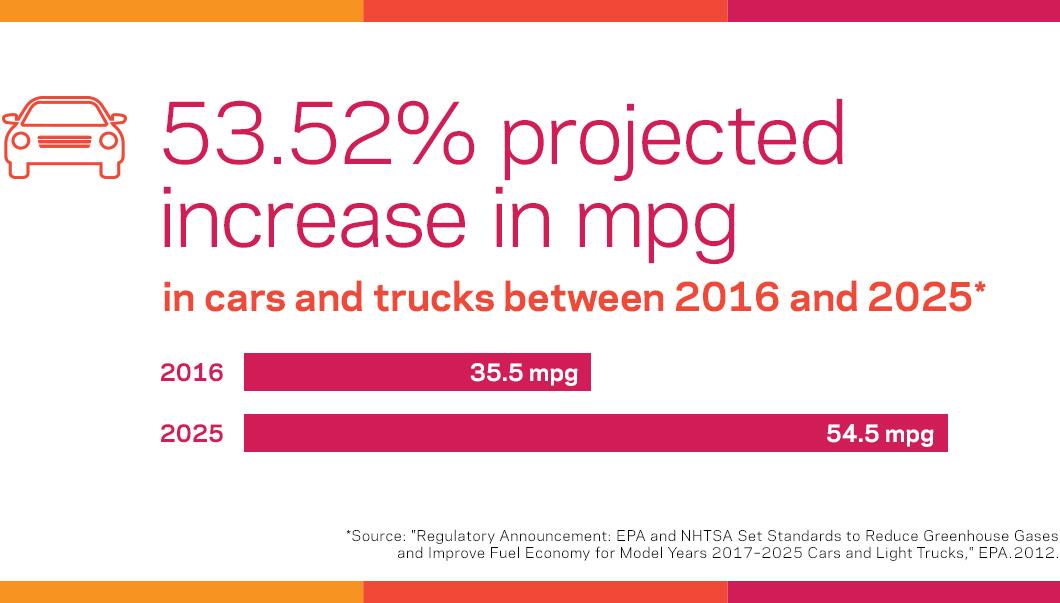 But keeping turbochargers running isn’t easy. Spinning at up to 300,000 rpm, turbochargers create more energy and heat in a smaller space. Considering the increased heat and incredibly high turbine rpm, one might expect a turbo to burn out in short order. And without a suitable industrial lubricant, it can.

Fortunately, Krytox™ lubricants function well even in these increasingly harsh environments. Where intense heat might cause a conventional lubricant to break down or burn up, Krytox™ products keep working. Used within its specified temperature range—which, depending on grade, could run as low as -70 °C (-94 °F) or as high as 399 °C (750 °F)— Krytox™ lubricant does not degrade or break down in pure nickel containers. Unlike hydrocarbons, it’s non-flammable, and thus can’t burn or carbonize.

As the environment inside the auto engine has become harsher, the environment in the car’s interior has become more inviting. Advanced engine management systems allow engines to run more quietly, and electric motors are quieter still. But this presents a new challenge, as squeaks and creaks previously masked by engine noise become audible to the driver and passengers.

Chemours took note of this new, and very different, challenge faced by the auto industry. “You can make something quiet by putting conventional grease on it,” says Rob French, Chemours Business Development Manager. “But 20,000 miles down the road, that squeak may come back because the grease dried out or soaked into the plastic surrounding it.”

Chemours, though, was again able to formulate a fix. “Krytox™ products solve this problem because it doesn’t dry out, it doesn’t degrade, and it stays put for the life of the vehicle,” French explains. “Apply it once, and it’s good.”

Lubrication at the Outer Limits

It’s these kinds of properties that allow Krytox™ lubricants to work in an even more punishing environment: aerospace. Used in planes, satellites, and spacecraft, this industrial lubricant is engineered to withstand extreme temperatures, pressure swings, radiation, vacuums, and more.

Advanced aviation comes with a host of demanding conditions, from repeated temperature and pressure cycles to high levels of mechanical stress and long maintenance intervals. Krytox™ lubricant comes into its own when it helps extend the service life of UAV components operating in harsh climates or in the long-lasting lubrication of aircraft fuel pumps and helicopter hydraulic pump splines.

Once you get outside the Earth’s atmosphere, things get even more extreme. Finding a lubricant that works for space suits, for instance, is exceptionally difficult. The suits are pressurized inside but face zero pressure outside in the vacuum of space. Plus, their outer skins may see temperature swings of hundreds of degrees as astronauts move from sunlight to shadow. Because Krytox™ retains its lubricating properties through such a wide temperature range— and because it doesn’t seep out of joints like traditional lubricant—it lets space suits function in this most hostile environment.

Rocket motors face even more hostile conditions. They must deliver colossal amounts of energy while moving from the warmth and pressure of the Earth’s surface to the cold vacuum of space—all the while experiencing incredible vibration. Again, Krytox™ acts as a facilitator, lubricating many of a rocket motor’s moving parts, including the turbines and pumps that deliver fuel and oxygen.

Practically every batch of Krytox™ lubricant is customized for a certain application. It’s available as an oil or grease and in 20 basic variations. But Chemours engineers also work with customers to adjust the lubricant’s characteristics for specific uses and in industries as wide-ranging as food production and space satellite engineering. The formula can be adjusted to provide such properties as corrosion resistance and electrical conductivity; it can be primed to operate in the deep cold of space—or in the broiling heat of a turbocharger.

“Every application is a different problem,” says Denise Dignam, President, Advanced Performance Materials. “Every kilogram of Krytox™ is different because you’re putting in different additives based on specific needs of the customer. In the case of a turbocharger, the formulation might be different for every model of a car.”

Though technology may advance, it can still be impossible to predict next year’s challenges, let alone those of the year 2030. That’s why Chemours talks to customers every day, looking for ways to foresee problems and customize solutions.

Discover more with C&EN and explore how far industrial lubricants have taken other businesses and innovations.