Users love the touch and feel of rubber made with Viton™. With a wearable, that’s super important.

A Catalyst For Motivation

Many people want to exercise and get healthy; they want to go outside and work out. Yet they come up with plenty of reasons not to, and one of the biggest challenges is getting motivated.

Fortunately there are products, made possible by chemistry, that can help motivate people by showing them every step on the way to a healthier life. It’s even better when users love the touch, look, and durability of these motivational wonders.

Wearables—those small, computerized devices—can count users’ steps, monitor their heart rates, remind them to hydrate, and much more. Even if the wearable's coolness factor alone encourages people to exercise, that's quite an achievement! And that’s not just theoretical: styling does make a difference, a recent PwC survey reveals.1 Among owners of wearables, 36% say they’re “strongly motivated” to use the device if it looks good and complements their wardrobes.

One part of many wearables—the rubber wristband—looks particularly handsome and wears well. And that’s in great part due to a product named Viton™, a high-performance fluoroelastomer made by Chemours.

The Touch, the Feel…of Viton™

“Users love the touch and feel of rubber made with Viton™,” says Anton Soudakov, North America Product Manager for Viton™ Fluoroelastomers. “With a wearable, that’s super important. They love the feeling it gives them when it makes contact with the skin. It’s almost as comfortable as leather. Also, it continues to look good over time, even after exposure to sun, lotions, or sweat.”

That can make a difference for competitors. In fact, when purchasing a wearable, 33.5% of athletes surveyed cite “comfort” as one of the the most important features, says an Athlete IQ poll.2

Plus, says Soudakov, rubber wristbands made with Viton™ boast a premium feel. “They don’t look or feel like cheap plastic or silicone,” he explains. “Viton™ has the mechanical resistance needed for the job, while remaining soft.” He says that several high-end watch manufacturers also use the product in their wristbands.

And for those looking beyond comfort, the material also boasts durability. “It keeps its look and touch for five to ten years,” Soudakov says. “And it won’t get degraded by light, heat, or ozone.”3 Soudakov credits the durable properties of Viton™. “In automotive applications, Viton™ withstands the most aggressive environment under the hood,” he says. “So it’s not surprising that it resists the stresses faced by wearable bands.”

The Market is Fit

The wearable tech market continues to be a fit one. In 2017, total wearable device shipments worldwide reached 115.4 million units—up 10.3% from the 104.6 million units shipped in 2016, according to the International Data Corporation’s (IDC) Worldwide Quarterly Wearable Device Tracker. And by 2021, shipments will almost double: IDC forecasts 125.5 million wearable devices will be shipped this year and that the total will hit 240.1 million by 2021.4, 5 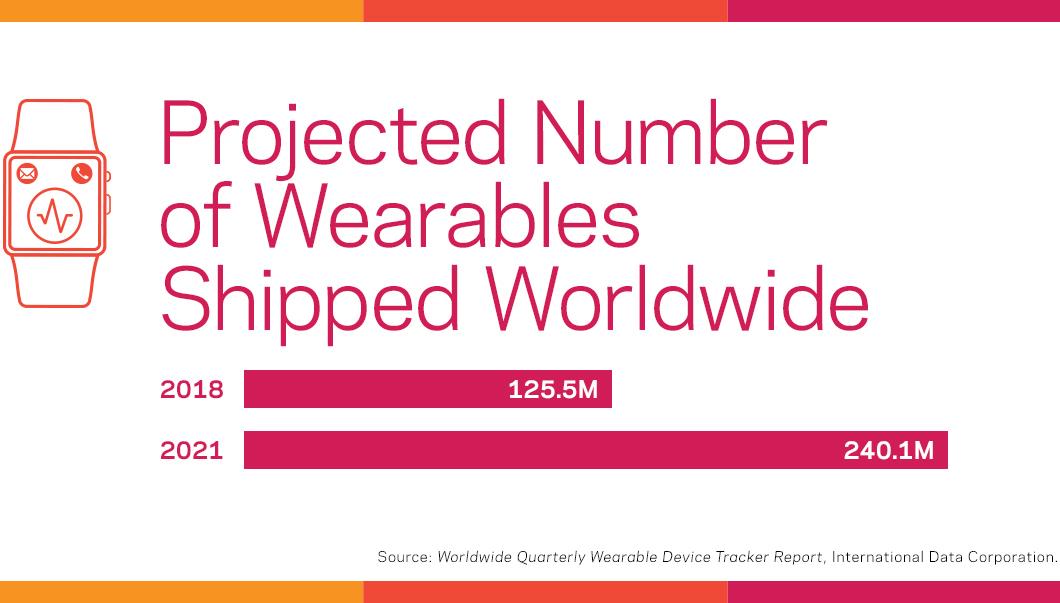 On top of that, one particular wearable band made with Viton™ can fit into the luxury wristwatch category, says Business Insider Australia.6 For a competitor in this category, user comfort becomes a considerable product asset.

Ultimately, infusing Viton™ into a wearable band alone probably won’t move someone to get outside and launch a new fitness regime. Still, it can be a factor. After all, a sleek, sporty convertible inspires road trips, and a fun, intuitive computer program can make someone actually want to work. In the same way, a comfortable, soft, wearable band that’s also handsome, sturdy, and durable—even over many years—may just give people that extra initiative they need to hit the trails.

Discover more with Chemical & Engineering News and learn about the chemical and materials science that makes fun possible.